Wonderful news from the doctor last week!
I can start running again!
Well, sort of.
Week 1 (last week) was 1.5 min walking alternating with 1.5 min run for 2 miles
This week is 1 mile, 3 times this week.

It's so strange, looking back to this time last year, I was running 20 milers training for the marathon, now the longest I am allowed to run is 1 freaking mile! Strange.

It feels really good to be back out there and running! At the same time I want to run more! I'm trying to be really good and follow my return to running plan. I know from having stress fractures in my shins in high school, that not following the doctors orders only results in longer recovery time. However, I have a feeling that this part of the healing process is going to be as painfully slow as the rest of it.

Seriously, why has no one invented skelegrow?
Posted by Molly T. at 1:45 PM No comments:

I stopped blogging.  I don't know why exactly.  I'm not a superb writer, my blog has no real purpose.... mainly me just rambling, I go bored with it, I got busy.... I don't really know.

So, what's been going on since I stopped blogging?

The good:
First off, I ran the Cleveland 10 Miler.  It was awesome!  It was possibly the best race i've ever run.  I felt great the entire time and I held a really steady (very rare for me!) and fast (for me) 8:30 mile pace for the entire race.  I put up a time I was really excited about.  After the race I had hopes of PRing in the Cleveland Half.

I also ran the Cleveland Half.  Also I really great race!  I would say that the Denver 1/2 is my #1 favorite, but Cleveland is a very close second.  I really like the race course, lots of turns, lots of things to see.  The weather was great (cold and rainy) the day of the race.  I didn't PR.  If I had run like I did at the 10 miler, I definitely think I would have.  My legs felt really heavy race day and my tummy got upset about halfway through the race.  I pretty much knew it wasn't going to be a PR day, but I still managed to beat last years 1/2 marathon time by a minute.  Being able to beat last years time on what I thought was an "off day" made me feel like I was in better shape and a PR might be to come one of these days.  Overall, I was really happy with the race. 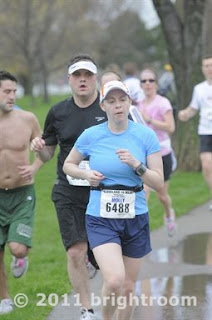 The Bad:
After the Cleveland 1/2, my running was just feeling really off.  I took an entire week off because I was feeling really fatigued.  My first week back my legs felt terrible.  I knew I needed new shoes.  Did I go and get some? Nope.  Why? Busy, Lazy, who knows.  July 3rd, I went for a 7 mile "long run" and my foot hurt afterwards.  I knew something wasn't right, but I told myself my laces had been tied too tight.  I ran on it, in pain, for about a week before I admitted to myself that this wasn't due to tying my shoelaces too tight.  I took a week off of running - did some spinning and elliptical.  Then I figured, hey, it should be healed by now, right?  Wrong.  I started running again and every time I stopped my foot hurt.  By the following week it was pretty difficult to walk without limping - and running was definitely out of the question.  I finally admitted to myself that something was wrong and went to the doctor.  Diagnosis - stress fracture in my second metatarsal.  It was visible by x-ran (not usual for stress fractures) suggesting that I may have even "converted" it into an actual fracture.  I was in an aircast for 3 weeks.  I've been out of the aircast now for about 4 weeks. 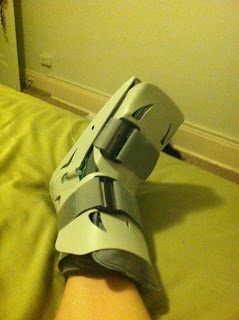 The Ugly:
We had to cancel our backpacking trip to the grand canyon.  I'm really really sad about this.  We have been planning it since January.  It was really hard not to be physically able to do it.  I also have had to bow out of the Warrior Dash and Akron marathon relay (sad).  I'm still not allowed to run and I'M GOING FREAKING CRAZY!  Yes, i'm being kind of a baby about this.  It's not the end of the world, i'll be able to run again, and there are many many people out there suffering from worse injuries or life threatening illness, so in the grand scheme of things I know it's not that big of a deal, but i'm having such a hard time not being able to run.  I'm sick of spinning and quite frankly I suck at swimming and I hate it.  I just want to run dammit!

It has occurred to me that venting my frustrations on my blog might provide a good outlet for my frustrations.  So, i'm back to blogging, and hopefully soon will be back to running!  I go to the doctor Monday and i'm really hoping for some good news!
Posted by Molly T. at 8:35 PM No comments:

Well, I got through last week and all of my school stuff went well. The weekend was a little hectic trying to catch up on all the chores i've been neglecting over the last month while working like a maniac. I'm hoping things will slow down a little bit and i'll have more time for myself in the next month or so. I got most of my workouts in last week. Thursday was supposed to be a 5 miler with some hills, but I was so exhausted by that point that I settled for a 3 mile easy run on the treadmill and called it a day.
Sunday - 6.2 miles
Saturday - 5 miles
Friday - off
Thursday - 3 miles
Wednesday - off
Tuesday - 4 miles with 3 x 3 min of speed
Monday - weights
Weekly Milage Total: 18.2 Miles
Posted by Molly T. at 11:56 AM No comments:

I'm feeling a little run down and worn out. This past month has been extremely busy on the school end of things. Writing a grant progress report, writing a change of project proposal for my grant, co-writing a review, and prepping for my next committee meeting. It's been busy, and stressful. I think it's almost over. The review is due this week and my committee meeting happens this week, so after that i'm hoping to go back to a somewhat normal schedule where I can actually get home at a decent hour and not stay up late writing or reading! I'm also looking forward to taking next weekend completely off (of work anyways... i'm sure i'll still be running). I really need some R&R. These last few weeks my weights routine has suffered, although I've still managed to get most of my runs in. I was pretty sore from the race last sunday, and overall just exhausted, so I skipped all forms of speed work this week. Here's hoping this week goes by as quickly and painlessly as possible!
Weekly Recap 2/14/11 - 2/20/11
Sunday - 8 miles
Saturday - 5 miles
Friday - off
Thursday - 4 miles
Wednesday - off
Tuesday - 4 miles
Monday - off
Weekly Milage Total: 21 miles
Posted by Molly T. at 1:11 PM No comments:

Let the 2011 racing season begin!
Let me start off by saying this race was very different than any race i've ever done and it was fun! I've done my fair share of winter trail running while growing up and, if you can believe it, even raced on my high school SNOW SHOE TEAM (yes this really exists). If I had to make a comparison, this race most closely resembled my snow shoe days (only without the snow shoes and with more slipping around). I've been toying with the idea of buying yak trax... but never got around to it. Too bad. They would have been helpful. It became clear to me early on that "fast" was not how I was going to be running. The day was beautiful, in the upper 30's (I think) and SUNNY!! The course was hilly and without traction I pretty much had to walk up and down the steepest parts. I managed to only wipe out once, and not to twist an ankle (I consider this a win!). What I did I think would better be described as riking (hiking/running) or jiking? (jogging/hiking), rather than actual running. Whatever it was, it was still a great day to get outside and great exercise. Man am I sore from all that sliding around! Towards the end I started to feel really down on myself for how God aweful slow I was going. My final time was 1:50:49.... for a 15K.... I can practically run a half marathon in that time! Well, after looking at the race results, I really don't feel that bad. The female winner ran 8:14/mile, there were a handful of people who ran 9ish min/miles and everyone else was 10+ min miles. After looking at that, my 11:54/mile doesn't seem SO bad.
Overall it was a great race, great support, great energy. I think there were more pictures taken than in the marathon! Hopefully there will be at least one good one.... I tried to smile.... it will probably come out looking like a grimace with my eyes closed (this is usually the case). I even managed to win a raffle prize: tickets to the Cleveland Film festival. Not to shabby. I think I'll do this race again. First I think i'll purchase some yak trax.
Posted by Molly T. at 8:50 PM 2 comments:

So, here's the thing...
I still have no motivation to follow a strict training schedule. I'm signed up for a 15K on February 13th. I haven't *really* trained for it. I did an 8.5 mile long run a few weeks ago and 8 this past weekend... so I definitely think i'll be able to finish it, i'm just not expecting a stellar performance. Now is about the time I should start training for the Cleveland 1/2 marathon too. I filled in the plan I used last year into my calendar... this should be week 2. The first few weeks of the plan consist of a few 4 mile and a few 6 mile runs each week, which is pretty much what i've been doing, so for now (and maybe for the whole time) i'm going to loosely follow the training plan and try to get as many of the prescribed long runs in as possible.
Weekly Recap 1/24/11-1/30/11
Sunday - 8.0 Miles. It was a good long run. I managed to keep my pace up despite snow packed roads.
Saturday - 4.0 miles. Icky weather...it was not a fun run.
Friday - rest
Thursday - I had planned 5 miles with some hills and speedwork, but forgot my ipod and could only manage 3 on the dreadmill before I gave up.
Wednesday - Tried a new Cardio/Weights class at the gym. It gets a thumbs up. I'm going to try to make it to that again!
Tuesday - 4.0 miles
Monday - Body Pump
Weekly Milage Total: 19 Miles
Posted by Molly T. at 6:03 AM No comments: 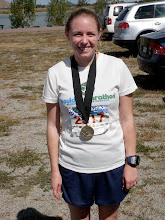 I created this blog to share and record my thoughts on running and training. Last year I completed my first Marathon. Additionally, i've completed 6 half-marathons and numerous shorter races.